The new version of Genshin Impact comes with a lot of surprises. We will be getting brand new four and five-star characters as well as re-runs of some of the older beloved characters. But in this version, we will also be getting a new region for Sumeru. And that means a lot more areas to explore and a lot more Piromgems to find. Besides the new stuff, we also have the old ways like events, daily commissions, and many more ways to earn primogem in version 3.4. Here we will break down all the ways you can earn primogems and how many will you be able to get in Genshin Impact version 3.4.

There are also some free reward codes that are there just in case you want to grab some free loot!

Genshin Impact Version 3.4 update: Total Primogems you can get

Breakdown of All Rewards in Genshin Impact version 3.4

Let us break down all the rewards from the chart one by one and see how we will be getting all these Primogems.

Genshin Impact will go on a maintenance break for version 3.4 and that will begin on March 1 at 06:00 AM (UTC+8).  Then the developers will give players 600 Primogems from their in-game mail. This is the standard procedure for every new version of the game.

Now for the daily commission, you will get 2520 Primogems by finishing all 42 day’s “Daily Commission”.  Each daily Commission gives 60 Primogems. Complete all of them every day and grab all those Primogems.

Unfortunately, there will be no new Archon Quest, but this new version is offering a Story Quest for Alhaitham. You can get 60 Primogems for completing the story.

As always, there is a live stream that is held to showcase the stuff that is coming to the next version. It will be held 2 weeks before the update. During the live stream, you will get about 300 Primogems if you are able to redeem the codes.

Like every other version, version 3.4 also has its own fair share of events. This time the lantern rite will return for the 3rd year. As is the tradition on lantern rite, we will be able to choose one four-star character for free upon completing the event. This event will also give out 10 free pulls via login event which is worth 1600 primogem.

Gnostic Hymn is the paid second battle pass in this newest version. Players who buy this battle pass will receive rewards such as 4 intertwined Fates and 680 Primogems.

Daily login in HoYoLAB leads Travellers with 60 Primogems. But there is a condition: they have to log in consistently for the entire duration of the new version 3.4.

It is absolute that, players will get a free Sojourner’s Battle pass in every update. Leveling up that battle pass will get the players 5 Acquaint Fates. But there is no extra free primogem in the free battle pass.

This one is another P2P and from this strategy, players can get 90 Primogems each time they log in. If you continuously have the Blessing of the Welkin Moon for the entire version, you will get a whopping 3780 Primogems.

This time, in version 3.4, there will be 3 cycles of Spiral Abyss. Every cycle rewards 600 Primogems but getting full stars for all the cycles can bring you 1800 Primogems. The first cycle will be unlocked on February 1, 2nd cycle on February 16, and 3rd cycle on March 1.

At the start of the month, you can buy 5 intertwined fates and 5 acquaint fates from Paimon’s bargain shop. Since this version will cover the start of February, you can buy these from the shops using non-primogem currency. Together they cost 1600 primogem normally.

In the new area, you can unlock puzzles and treasure chests, and new world quests. The new area’s name is the Desert of Hadramaveth. From all of the quests, you can get 2000 Primogems or more.

As there will be new areas, there will be hidden achievements too. So once you completed all of them you may gain around 200 Primogems.

Are you excited about all the free Primogems you are getting in this Genshin Impact version 3.4 update? Write your thoughts in the comment below! 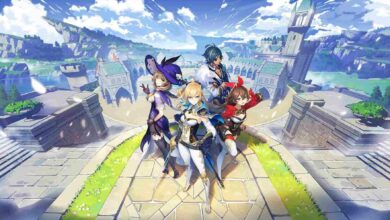