Anthony Starr, the actor playing Homelander, has put up a great performance in The Boys. He has established himself as a great villain, despite his role as a hero, which is quite ironic. The audience loves him, because of the way he is and where almost every scene with him is quite tense which adds even more to his character.

Being the main villain of the show, we have seen quite a lot of him and seen how his character went from the perfect poster boy for Vought to presenting a family-friendly and patriotic image in public. In the background, he turned into an unhinged narcissist who presents a serious threat to the innocent people, which he is supposed to protect.

Based on all the Supes seen so far in the show, Homelander is undoubtedly the most gifted. Although, he is not skilled in any way when it comes to fighting. He relies on his laser and X-Ray vision, super senses, the ability to take damage like a tank and super strength.

The start of Homelander’s troubles

When he is first mentioned in the first season, Billy Butcher for some reason, chooses to say that he is a “Saint”, hiding the reality, how they are connected and why he really wants to get to the Supes so desperately. Homelander makes an appearance as a rather calm individual, leading The Seven. However, in the first episode itself, we’re made to see how there’s something quite wrong with him and how he might not be as innocent as he seemed after he lazers a Mayor’s plane on his own accord and later when we find out why Butcher is after him. Moving past that, in every scene he is in, it seems like his character just seems to keep getting worse, as we see how The Seven are falling apart internally and his rather weird relationship with Stillwell.

Soon after, we see how Homelander really feels about his job when he lets a plane go down, with his carelessness playing a role in it, although he eventually uses it to his advantage. Building up his image among a certain rather large political demographic and appealing for entry into international warfare.

Through some of these episodes, another character who is pretty important is Maeve, who has a start in the show that isn’t too promising, but we get to see how she contrasts Homelander, being the only member of The Seven aside from Starlight to have something of a conscience.

Moving on in the first season, we finally start seeing Homelander’s puzzle pieces falling into place as we see the appearance of Supes across international waters, courtesy of Homelander and A-Train. Charming people and getting them riled up and finally, Homelander takes out Stillwell, who was supposed to be his weakness but saving Butcher, which really tells us why he hasn’t gotten rid of The Boys yet.

The simple answer is that he seems to enjoy having them around, as they finally present a challenge despite not having any powers, with the exception of Kimiko and before everyone starts shooting up Temp V. He is confident that The Boys or anyone else, Supe or not, cannot present any threat to him.

Homelander’s takeover of Vought, relationship with Stormfront and Ryan

After Stillwell’s death and the start of the second season where Supes is now fighting overseas, Homelander starts to change things up at Vought as he tries to take over, challenging even Stan Edgar’s authority, although he seems to be ahead of Homelander. The introduction of Stormfront seems to change things and sends the narcissistic, attention-hungry Homelander further down the spiral, as she gains the attention of fans and steals the limelight, leading to Homelander threatening Starlight.

He further kicks A-Train out of The Seven and does other rash things. However, this quickly changes when the two of them develop a weird power-driven romantic relationship, but not before falling out of favour among the public and lasering a crowd full of people in his imagination.

Homelander also finally gets to meet Ryan, his son who he bonds with and is actually rather kind, as compared to the others. He does expect a lot from the child, but Ryan actually seems to bring out a better person in him. One thing to note here is that while Homelander is rather on the sociopathic end, he still doesn’t agree with Stormfront’s ideologies and that is evident in some scenes. The fourth episode ends on a rather disturbing note, as Homelander strangles “himself”.

The highlight of the season’s finale, aside from some “girl-on-girl” action was Ryan turning Stormfront into a vegetable and killing his mother, after which he chooses Billy over a defeated-looking Homelander, who just massacred a bunch of Vought soldiers. A certain scene in the finale with Homelander doing something, rather indecent in the moonlight really cements how unhinged he has gotten.

Peacetime and control over Vought

The third season starts off rather slow, as we see a relatively more relaxed episode to begin with, although there is still a tense conversation between Butcher and Homelander, the latter being upset with the new changes at Vought, where he is being sidelined by Starlight. Later on, we see him go off into a narcissistic monologue and encourage a suicidal woman to go ahead with it.

The scales tilt after that as Homelander suddenly has more leverage and doesn’t seem to be fazed by Starlight and Maeve’s attempts to blackmail him either. In the meantime, the show sets up the return of someone who finally might be able to rival Homelander. It takes Stan Edgar off the board as a result of Homelander striking up a deal with Neuman, Stan’s own adopted daughter.

Once Homelander takes over, he truly lets his ego come in the way of leading Vought, as Edgar’s critique of him simply being a “bad product” finally hits, as he makes multiple bad moves. Still, he’s bound to his greatest weakness, his need for validation among the public.

With Soldier Boy and Black Noir’s disappearance (Noir being the only one who Homelander really trusted), Homelander is at his lowest, having an imaginary conversation with a colder version of himself devoid of human emotions and the version he actually aspires to be. Finally, we see him in a fight with Soldier Boy, Hughie and Butcher which he does escape (barely).

In the final episode of the third season, we see Homelander’s need for validation show up once again as he tries to appeal to Soldier Boy, his father, as we see why he is this messed up. He yearns for family, for love and attachment. Growing up in labs has left him deprived and made him incapable of dealing with the powers he has. It also shows us why he’s exceptionally nice to Ryan, as we see him and Butcher on the same team for once against Soldier Boy.

We can’t end off the season without something to keep the fans on edge though and this comes when Homelander lazers a protestor, much to the joy of a crowd and Ryan himself!

To begin with, the fact that his psychological issues are deep-rooted and a combination of the powers he wields, his past and how much he learns for love. However, the fact that he now has the approval of some even after making someone’s head explode means that he truly has the freedom to do whatever he wants and that is incredibly scary. Viewers will see how Ryan is the one person he cares for and subconsciously, he knows what he lacks and what he wants to provide for his own son.

It should be interesting to see what the showrunners do with his role, after creating such a great character arc for him, making it quite a task for themselves to figure out which direction the show should take, to satisfy fans.

Have you enjoyed Homelander’s character arc so far into the show? Let us know in the comments! 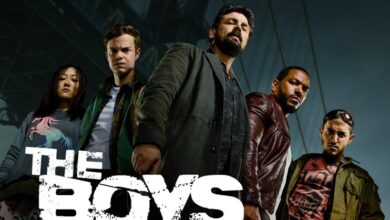 Jeffrey Dean Morgan is joining The Boys for Season 4