These leaked screenshots reveal that Halo Infinite Battle Royale mode will have an intro phase, release phase as well as a deployment phase which is not much different from the other BR games.
The major difference that caught the eyes of the fans was the initial weapon loadout.

Twitter user Aina alleges that they have heard the rumours the Battle Royale mode of Halo Infinite, codenamed Tatanka, may arrive with Season 4 which is scheduled to release sometime in mid 2023.

In a recent livestream, presentation of AMD, it was revealed that Halo will support ray-traced shadows across Arena and Big Team Battle multiplayer modes.

According to AMD, players with the hardware are going to notice improved lighting, sharper windows and increased performance on RX 7000 series graphics cards with ray tracing acceleration.

What are your thoughts on the Halo Infinite battle royale mode leaks? Let us know in the comments below! 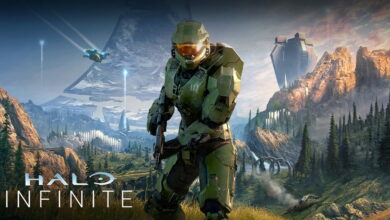 How to play Halo Infinite in split screen co-op