Joycity’s Crypto Ball Z on WEMIX is the Play&Earn version of Heroball Z, the sequel to Game of Dice: Board and Card and Anime, an IP that acquired 50 million players worldwide. The new Crypto Ball Z combines both Idle RPG and shooting game elements. The game was officially launched worldwide on WEMIX as a blockchain game with six different characters. Here in this article, we’ll rank the Crypto Ball Z on WEMIX heroes or commanders from the best to worst in a tier list

Crypto Ball Z on WEMIX is set in the future where planet Earth is attacked by unidentified extraterrestrial forces, users will take the form of heroes from the heroes association and save the world from the attacking forces. Heroes can be used for exclusive battles through the season system. Players can obtain new heroes by using the ‘Combine’ feature, or by upgrading. Players can even earn by playing the game.

Crypto Ball Z on WEMIX characters are divided into 3 tier lists; S, A, and B. These tiers are formed on the basis of a hierarchy that takes power, fighting ability and other things into consideration. S-tier is usually filled with characters that have all-rounder abilities and are hard to obtain.

Each commander from the tiers has their own abilities and skills. Below are some of the basic details about each Commander to help you decide who to use.

Rina is a fierce all-rounder who also acts as the morale booster of the team, she is always happy and has a bright smile on her face to cheer others up.

Rose initially planned to take over the world with her enormous power which she would obtain after a deal with the devil, but the current situation on Earth has put her plans on halt. Rose has an excellent attack pattern, but lacks swift movements.

Rose is a perfect amalgamation of both Beauty and Beast, she can fight extremely well on the battlefield but her attack power decreases as soon as the battle field is filled with many opponents.

Marie is a graduate of the Wizard School with the highest marks, she plans to find her long-lost brother by becoming famous with her mysterious magic. She can deal a good amount of damage to the opponents if used manually.

Len is a mysterious cat who has the ability to talk and walk like humans. He is a very good defender but lacks strong attack patterns to cause damage to the opponents. 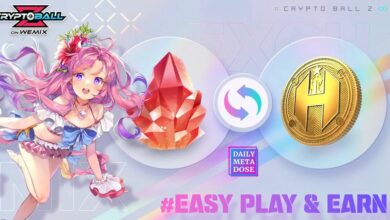 How to play and earn from Crypto Ball Z on WEMIX